Wow. It has been a long time. Life got in the way but let’s be real, I have just been lazy. I have wanted to write this review for a long while now. I mean, I bought the damn game on the opening week for it (possibly day) so I should have done this by now.

Overcooked tells the story of 4 chefs (or 2/3 depending on how many players there are) tasked with going through the ages starting from the ’90s heading in to the present day to fend off and satisfy the evil “beast”; a giant meatball with spaghetti hands. You are aided by the Onion King and his dogs, one of which is named Kevin!

So the storyline is ridiculous, but c’mon! Who doesn’t love a dogs with human names and a GIANT meatball villain?!

Controls are very simple with it just using a maximum of 3, that’s right 3, whole buttons. One for grabbing, one for chopping and one for getting a speed boost. If you include the analog sticks then I guess 4 but who does that?

I like simple to follow controls because it means I can play these sorts of games with family. Most notably, my mother.

My mother got inherently addicted to this game, as did I. The co-op aspect of this game will fill living rooms with shouting, screaming and eventually cheering as you finish each level. I have never so badly wanted to play a co-op game as actual co-op as most will include a single player option. Overcooked does but you are still required to control 2 people and then controls switch to 6 buttons and I don’t want to get in to that.

Levels are varied to the extremes from trying to navigate across a slippery ice path with soup in hand to a haunted house in complete darkness trying to make a pizza. Stressful as they may be, the satisfaction of getting 3 stars greatly outweighs it. The designs are wonderfully done and had that ‘old-school’ nostalgia affect on me; I loved it.

Each level has a time limit that varies based on area and how many players there are. I noticed that the final level when playing single player starts from 15 minutes whereas with two it drops significantly to 12. I don’t want to imagine what it is with 4. But it adds to the fun! I loved screaming at my mother to “PUT THAT BURRITO DOWN AND SAVE THE RICE” as she ran off the side of a rock surrounded by molten lava and her character presumably burned to death.

The characters are so cute!

Overcooked shows a surprisingly wide variation of character selection for an indie simulation from a large fat cat to a man with a huge grin which after a while becomes rather menacing. But the one who sticks out the most: the raccoon in a wheelchair.

If a small title like this can include this much diversity, I’m sure AAA titles should soon get the hint. Maybe not. It’s fine. I’ll continue to dream of the day EA releases a game about a wheelchair bound raccoon and his adventures.

So what’s wrong with Overcooked?

First of all, it’s short. Playing the story without aiming to get 3 stars on every level ends faster than what you’d expect. My heart sank when I realised every corner of the board had been filled after only a few hours of play time. I hope that Ghost Town or Team 17 will produce some DLC of additional levels sometime soon… (Or a sequel…) However, the game has a lot of replayability especially for those who didn’t get 3 stars on every level first time around (me).

Second of all, I found some levels contained small but sometimes unplayable glitches. On one of the lava levels myself and my mother found our character would occasionally speed boost off of the screen and die despite the fact we hadn’t touched any of the buttons and would have been waiting for the tables. Annoying when it happens once, but it happened to at least one of us almost every time we loaded the level.

Another was on one of the ice levels my character did the same speed-boost trick but actually ended up on the outside of the kitchen. Not off the map. The kitchen. I was stuck in the outside trees with the penguins without being able to throw myself into the water or help my team out, slowing us down quite a bit and causing us to lose out on a star.

The game is fantastic.

I would highly recommend Overcooked to anyone who wants a fun, easy co-op game to play with friends or with someone who maybe doesn’t play a lot of games and wants to join in! This is the first game I have wanted to 100% in a long time as achievements are easy to obtain and like I said, it’s addictive. I had to stop myself and my mother playing just so that we wouldn’t finish the game too quickly.

Shout out to Ghost Town and Team 17 for the little message at the start of the game allowing anyone to use footage of the game for whatever they please. It’s hard to find a studio that allow that anymore and I’m happy to see one that understands: Lets Players are advertising your games, not stealing them. 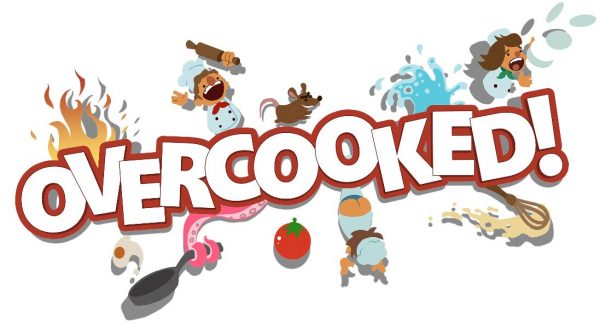